Earth was the third planet in the Sol system. It circled a yellow sun, which gave any native of Krypton amazing super powers.

It was the homeworld of the human race as well as many other animals, plants and super powered beings (metahumans) - aka superhero's and supervillains.

The Justice League of America sworn to protect the Earthlings and the entire planet from alien invaders, such as invasion forces from Apokolips. But they also protected Earth from evil people who wished to take over it, like the supervillain team the Legion of Doom.

It has been said, that the Earth is alive, internally and externally.[1]

Although the Earth did have a molten core, the center of the Earth was mostly hollow, with many areas that are inhabitable, such as Skartaris and the Prehistoric netherworld.

Around the 38th century, the Earth's capitol was a city located in a large dome, which was constructed to keep out the hostile Barlocks.[2]

Earth cities and farmlands
Too Hot to Handle

A bridge, farmlands and bodies of water on Earth
The Fantastic FRERPs 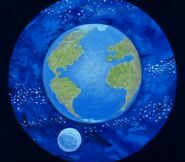 Earth and its' moon, as seen from Jor-El's telescope.
The Planet-Splitter

Earth, as envisioned by Darkseid, similar to his homeworld of Apokolips.
Battle At The Earth's Core

The Planet Earth
The Death of Superman