Dinosaurs are an animal species that were common on earth during prehistoric times. There are many types of Dinosaurs. Dragons may very well be a type of Dinosaur, or related to them.

Some Dinosaurs in Molesville
The Mysterious Moles

A Dinosaur
The Mind Killers! 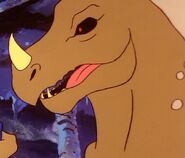 Dinosaur from the Unknown Wonderland
Battle at the Earth's Core

A dinosaur
The Time Trap 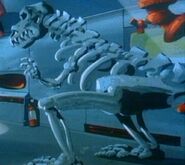 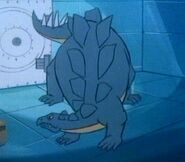 Tyrannosaurus Rex
Day of the Dinosaurs

T-Rex
Island of the Dinosoids 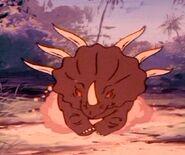 Styracosaurus
Island of the Dinosoids

Stegosaurus
Island of the Dinosoids
Add a photo to this gallery

The T-Rex in Elevator To Nowhere appeared to be holding Doctor Wells, but in real life it could not be able to hold things.

Retrieved from "https://superfriends.fandom.com/wiki/Dinosaur?oldid=90371"
Community content is available under CC-BY-SA unless otherwise noted.