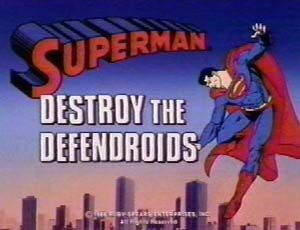 Lex Luthor now gives the impression of being a legitimate businessman and also wears a Kryptonite ring which prevents Superman from attacking him (although he must be in close range for it to work).

The episode begins with one of Luthor's robots breaking into the U.S. Mint in Metropolis, where it steals a file where the U.S. Army has plans to transport a billion dollars in gold bullion from Metropolis to Fort Knox. However, before Superman can stop it, the robot self-destructs. When Superman confronts Luthor about this, he denies involvement and stands on his rights.

Luthor manufactures robotic machines called the Defendroids, which are supposedly designed to protect the citizens of Metropolis. Many citizens then make the claim that Superman is no longer needed, since Luthor's machines are more than enough to protect Metropolis. During a fire at an apartment building, Superman rescues an elderly couple, but is upstaged by the Defendroids, who rescue some children and gain greater publicity.

Perry White sees headline after headline about the Defendroids' heroism, such as saving everybody from a subway crash. This is followed by headlines about Superman's waning fame, and finally a story about Superman appearing before the city council to announce his plans: "Superman Quits!" Trying to imagine a Metropolis without Superman, Lois Lans, Jimmy Olsen, and Clark Kent investigate a case of subterranean rupturing in the country. Their drive is interrupted when an earthquake forces the news van into a trench and they are about to be killed by magma. However, Superman appears and while swimming through the magma, is intrigued by a piece of shrapnel and claims it. After Lois and Jimmy are gotten to safety, they wonder where Clark is, then Superman appears without his cape, saying he "rescued" Clark and is bundling him in his cape to protect him from burns, and is leaving to tend to Clark, who should recover. Before leaving, he gives the shrapnel to Lois, saying it is a fragment of a bomb, which lends creedence to a theory that the Defendroids are gaining great publicity as Luthor is making sure of these prior dangerous events.

Retrieved from "https://superfriends.fandom.com/wiki/Destroy_the_Defendroids?oldid=94058"
Community content is available under CC-BY-SA unless otherwise noted.