David Kaye is a highly prolific actor and voice actor.

He also provided the voice of many characters from the DC Comics library, in both animated productions for Cartoon Network as well as video games.

He's also provided a number of voices to characters that have been seen in films or programs from Toonami, Disney, Warner Bros. Animation and others.

He has also done radio as well as television. 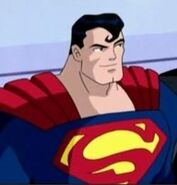 Retrieved from "https://superfriends.fandom.com/wiki/David_Kaye?oldid=87206"
Community content is available under CC-BY-SA unless otherwise noted.