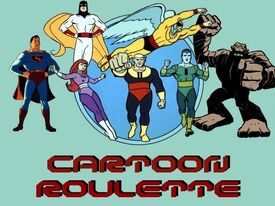 Cartoon Roulette was a television series that aired on Cartoon Network's Toonami block from March 17, 1997-March 6, 1998.

The show featured re-runs of the Paramount Pictures' Superman cartoons from Max Fleischer, starring the Superman of Earth-Two, and also featured other cartoons with Hanna-Barbera original superheroes.

Below is the list of the cartoons that was part of this series.

Toonami Lineup Bumper with ThunderCats, Robotech, and Beast Wars (1998)
Add a photo to this gallery

Retrieved from "https://superfriends.fandom.com/wiki/Cartoon_Roulette?oldid=89253"
Community content is available under CC-BY-SA unless otherwise noted.