Bumblebee (real name Karen Beecher) started off her career as a member of the Teen Titans.

In the parallel universe of Earth-One, a brainy and beautiful New York librarian, Karen Beecher met Mal Duncan (aka the Hornblower and the 2nd Guardian) after the first group of Teen Titans broke up. The two teens fell in love.

After Mal successfully helped the Titans, defeat Dr. Light, Karen still felt the Titans did not appreciate Mal, so she decided to change that with a high-tech super-suit of her own design. Donning a winged costume equipped with bee-themed gadgets, Karen broke into the Titan’s Lair as the Bumblebee and feigned a surprise attack. Her plan was meant to give Mal a chance to flex his powers and look good in front of his teammates. But Bumblebee recognized the folly of her scheme when Mal’s friends quickly rallied to his defense. With that, Bumblebee fled, realizing she has miscalculated the entire situation.[1]

Later on, Karen revealed her identity to Mal and the Titans and apologized for her actions. Eventually, the Bumblebee joined the Teen Titans, as the team set up a new headquarters at Gabriel's Horn, a discotheque in Farmingdale, Long Island. The disco was actually a cover for their secret underground headquarters. Through Gabriel’s Horn, Mal was afforded an opportunity to have a steady gig in Roy Harper’s rock group, Great Frog, in which he played the trumpet.[2] 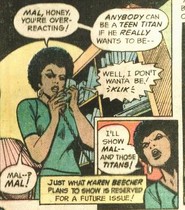 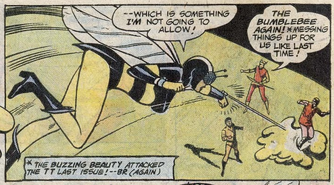 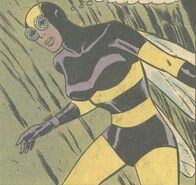 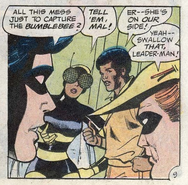 Retrieved from "https://superfriends.fandom.com/wiki/Bumblebee?oldid=68263"
Community content is available under CC-BY-SA unless otherwise noted.