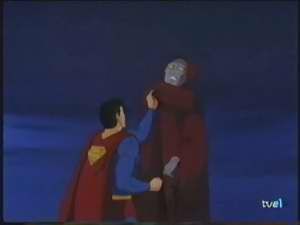 Lois and Jimmy interview a bookstore owner named Chilton Bone about an ancient medallion named the Talisman of Ola. Bone chases them off and uses the talisman to turn into Bonechill. When Lois, Jimmy, and Clark come back, Bonechill reanimates some ancient mummies to attack them. Bonechill escapes and attacks a group of teenagers. Superman manages to rescue them, but Bonechill captures Lois, Jimmy, and Perry White. He wants to use them to distract Superman while he goes off to gain more power. Superman, however, rescues them and stops Bonechill by destroying the talisman.

Retrieved from "https://superfriends.fandom.com/wiki/Bonechill?oldid=53431"
Community content is available under CC-BY-SA unless otherwise noted.