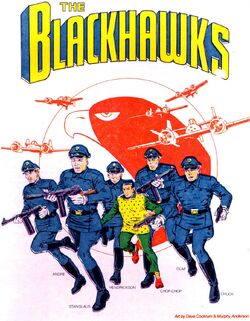 The Blackhawk Squadron is a team of ace pilots that were gathered together from all over the world to defend earth against evil. The leader of the team is Bart Hawk.

The Blackhawk Squadron is headquartered at Blackhawk Island. It is situated somewhere in the Atlantic Ocean. The island is not listed on any navigational charts, nor is its location known to any government. Blackhawk Island housed the members of the Blackhawk Squadron, their planes, maintenance equipment, storage facilities, and more.[2] Toward the end of World War II, when the Blackhawks shifted their campaign to the Pacific Ocean to fight the Japanese, a new Blackhawk Island was located somewhere near Japan. At the same time, it was apparently close to the continental United States, since it was a short flight from their "mainland barracks", which seemed to be on the west coast of the U.S., and they could respond quickly to emergency calls which mostly came from the U.S. 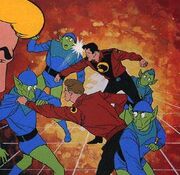 The Blackhawks help Aquaman fight off an alien invasion! 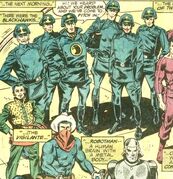 Retrieved from "https://superfriends.fandom.com/wiki/Blackhawk_Squadron?oldid=62547"
Community content is available under CC-BY-SA unless otherwise noted.