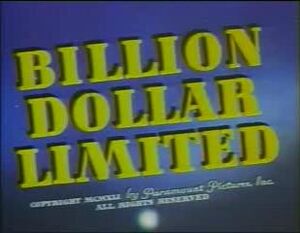 Previous Episode
Next Episode
The Mechanical Monsters
The Arctic Giant

The Daily Planet's front page story is an article written by Lois Lane, which features the headline: Billion Dollars In Gold En Route To Mint. And a sub-headline reads: Largest Single Shipment of Gold Ever Attempted." At the train station, guards armed with machine guns are on duty to protect the train from potential dangers, while others are loading the train with gold from an armored car. At the entrance of the train, Clark tells Lois he's sorry he can't come with her, because he has another story to cover. Lois boards the train and tells him it's all right, and that she'll see him later at the office. Just then, the armored car leaves the train station, and as it pulls out at the intersection, a parked car on the side of the road turns on its' headlights. It is filled with men dressed in black and they begin to put masks on. They then activate a switch that transforms the car, making it unrecognizable, and hiding the license plate, and also giving it armor. Meanwhile, the final armored car's gold is loaded on the train, and a man holding a lantern steps onto the train and yells: "All up!"

The train takes off, and Clark waves at Lois with his hat. The transforming car then begins pursuing the train. In the process it almost runs Clark over, and he jumps out of the way. As the train speeds down the track, Lois is writing the story on her type writer from the passenger car on the train. Meanwhile, the red transforming car begins to catch up to the train, and from the road they get close enough to the train to jump out onto the train and two of them board it. One of them pulls a switch that releases the hitch that latches the other cars behind it which are full of armed guards. The guards attempt to fire at them, but they are too far away, as they are no longer hitched to the rest of the train, and have no engine to catch up. The two thieves make their way to the engine at the front of the train, where the Engineer and a guard are there, and they attack them, and in the process one of the thieves and the Engineer call off of the train, and the other one is locked in combat with the armed guard who due to the struggle, is unable to aim his machine gun at the thief, but when he fire it, the noise alerts Lois Lane. She opens the door to her car and sees the two men locked in combat and fall off of their train and off a bridge.

The armored car comes around to the other side of the train and Lois boards the engine car. The thieves in the armored car open fire with machine guns and Lois ducks and grabs the machine gun that the guard had dropped before falling to his death. She then open fires on the thieves.

As the train reaches another train station, a man with a lantern is alerted by the fact that the train doesn't stop, he runs back inside the station and sends out a message in Morse code, which informs the bridge station to lower the bridge, just in the nick of time. Another Morse code message reaches the Daily Planet stating "Billion Dollar Limited Running Wild." Clark then states that "This looks like a job for Superman!" He then darts outside and hides behind some crates near a Daily Planet van, and turns into Superman. He rushes off after the train.

Meanwhile the red car gets far enough ahead of the train to switch tracks sending it on a direct collision course with a boxcar full of explosives. Superman is flying overhead, and he notices the situation. Superman uses his super strength to pull up the tracks and switch the train to the right tracks. Superman gets on top of the train and runs up toward the engine...but as the train enters a tunnel, Superman leaps over the hill. The red car again gets ahead of the train and parks under the bridge that the train crosses over, and they plant dynamite and blow up the bridge, causing the train to fall. Superman leaps down and catches the train, and places it back on the tracks on the other side of the bridge. The car drives up to the front of the train and one of the bad guys tosses a small bomb on the engine, and Superman jumps after it, but he misses it and it explodes the engine car, but he manages to pull Lois out of there before that happens. The boxcars behind it begin to fall backward speeding downhill, since the train was moving uphill before the engine was destroyed. Superman flies after the train and begins pulling it back uphill and the thieves begin shooting at him and throwing tear gas at him, which almost makes him drop the train, but he is far to powerful for the thieves. He then takes the train to the Government Mint, where it is now safe.

Later, a Daily Planet headline written by Lois Lane reads: Superman Saves Billion Dollar Gold Shipment. The sub-headline reads: After Bringing Masked Gangsters to Justice, Superman Disappears. Public Mystified. Clark is reading the article she wrote and he mentions how uncanny it is that Superman always shows up when you need him. And then Lois says she didn't even get a chance to thank him. Clark just holds up the newspaper and grins.