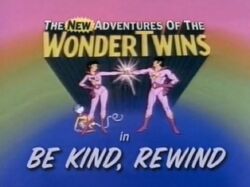 At the Downtown Video Store, Zan and Jayna are looking for a movie to rent. Zan is explaining Weekend at Bernie's III to Jayna. He tells her that you don't have to see the first two films to understand what's going on, you just have to know that Bernie's dead.

But just then, the Wonder Twins notice Marvin, Wendy and Wonder Dog at another section of the store. They noticed that Marvin gained a lot of weight. They then realize that they got to get out of there before they notice them. They then duck for cover in the Adult Video section downstairs. But once they get down there Jayna feels uncomfortable surrounded by pornographic movies. Zan then notices that Marvin followed them downstairs. Desperate not to be found by him, the two of them use their mutant Exxorian powers and Jayna turns into a very skinny bear, resembling a throw rug, and Zan turns into an ice chair. But Marvin recognizes them instantly, greets them, and tells them that he didn't know they were into Adult films, and that that's pretty "progressive...for a brother and sister." Just then, one of the customers overhears Marvin say that, and he glances over to see what's going on. Zan then said "We're on a case." But at the same time Jayna said "It's for a Bachelorette party." They then look at each other, realizing they goofed up and contradicted each other, and then Jayna says "It's a case involving a Bachelorette party." Then Zan chimes in and says "The Bachelorette Party Murderer!" Marvin is surprised that they are handling murders now. Jayna then asks how he's doing. Marvin says he's doing great, and that his and Wendy's band have just got signed to a major label. He then tells them to check out their website. He goes on to say that there's no hard feelings about them getting them fired from the Superfriends, to which Zan says that "They told us you quite!" But Marvin tells them that it was a blessing, that he was going to give them some "privacy," and that they should all get together and do something sometime. He then leaves, and relieved, Zan tells Jayna "that was bizarre!" Just then, Gleek gets a hold of a large amount of Adult films and Jayna tells him "Gleek! Put down the porn!" Zan tells Gleek that they don't even have a DVD player. And just then, a man sits down on Zan, who is still in the form of an ice chair, and he says that "This chair is not for sitting."

Meanwhile, Gleek is still holding the Adult DVDs, and Jayna says: "I am not going to ask you again!"

Retrieved from "https://superfriends.fandom.com/wiki/Be_Kind,_Rewind?oldid=67405"
Community content is available under CC-BY-SA unless otherwise noted.