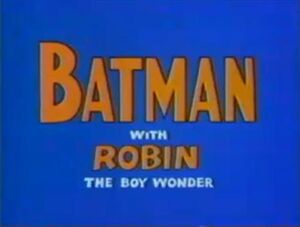 Batman with Robin the Boy Wonder is a Filmation animated series that premiered on CBS on September 13, 1969.

It consisted of repeats of the Batman segments of The Batman/Superman Hour. These episodes were repackaged without the Superman and Superboy segments. It is also known as The Adventures of Batman.

Batman and Robin would next appear in a The New Scooby-Doo Movies crossover, various versions of Super Friends and The New Adventures of Batman in 1977 in television.

In 1985, Warner Home Video released five selected episodes of the series on VHS in the "Super Powers" video collection along with Aquaman, Superboy and Superman. These videos were re-released in 1996 and are out of print.

Retrieved from "https://superfriends.fandom.com/wiki/Batman_with_Robin_the_Boy_Wonder?oldid=83713"
Community content is available under CC-BY-SA unless otherwise noted.