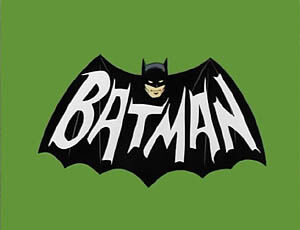 Batman was a thirty-minute prime time, live action television series broadcast by the ABC Network between 1966 and 1968. Premiering on January 12th, the series featured actor Adam West as the perennial character of Batman, while Burt Ward donned nylon stockings and fairy boots for his portrayal of the erstwhile sidekick, Robin.

The series took the tradition of Batman into uncharted territory, oftentimes mocking the character's heritage with trite dialogue and overly campy plot devices. The show was noteworthy for its memorable use of onomatopoeia during climactic fight scenes. Despite the clumsy nature of the series however, the show proved popular to many fans, and transformed Adam and Burt into modern pop culture icons.

When not fighting crime as Batman and Robin, the Dynamic Duo were often found at stately Wayne Manor in their respective identities as Bruce Wayne and his "youthful ward", Dick Grayson. Living alongside them in the vast mansion, was doddering old Aunt Harriet, and their mild-mannered butler, Alfred. Alfred possessed the good fortune of being the only other person to know Batman and Robin's secret identities.

Unlike the earlier movie serials of the 1940s, this was the first Batman project to feature Batman's rogues gallery of villains. Cesar Romero made numerous appearances as the Joker, while Burgess Meredith reinvented the image of the Penguin, with his crooked smile and trademark "squawk". Julie Newmar provided Catwoman's rolling "R"s, but was unavailable for the 1966 movie Batman and was replaced by Lee Meriwether. The part was recast a third time for season three when Newmar was committed workwise, with Eartha Kitt taking the role. Two men provided their talents to the role of the Riddler — Frank Gorshin for seasons one and three; and John Astin for season two, when Gorshin pulled out due to salary disputes.

By season three, declining ratings prompted the introduction of a third partner to the Batman Family, Barbara Gordon – aka Batgirl (played by Yvonne Craig). The pattern of the series also changed, being cut down from two episodes a week to one. The cliffhanger endings were eliminated, as it was felt these would be difficult to remember from week to week. Stand-alone episodes were introduced, with next week's villain being introduced at the end of a story.

Although Batgirl was an immensely popular character, her presence could not save the series, and it was cancelled by ABC in 1968. Two weeks after the cancellation, NBC offered to make a fourth season, providing the sets — the Batcave, Wayne Manor and Gotham City Police Headquarters — were still available. However, NBC's offer came a week too late, as the sets had already been demolished.

Retrieved from "https://superfriends.fandom.com/wiki/Batman_(TV_series)?oldid=88953"
Community content is available under CC-BY-SA unless otherwise noted.