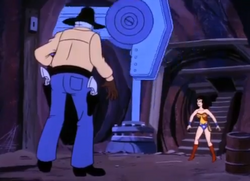 Batman: Dead or Alive is the thirteen episode of the third season of the Super Friends series.

After Batman humiliates him in combat, an intergalactic outlaw named the Capricorn Kid puts a bounty on the Dark Knight's head.

The Capricorn Kid and his Robot Gang capture Zan and Jayna at the Hall of Justice. They take the Wonder Twins to Texicana, an Old West Themed planet, and put them tied up into a well filling in water. The Super Friends arrive and split up to search for the teens before it is too late. Aquaman is captured when he is stuck in the mud and trapped by an earth moving machine. Wonder Woman finds one of the robot cowboys at an old rig, then, the robot cowboy challenges Wonder Woman to a duel, and captures him with her magic lasso, winning the duel, but the robot horse has paralysis beam eyes and Wonder Woman is made helpless. Superman is lured to a cabin by robot cowboys on flying robot horseback, and tunnels into the cabin and seize the pair, but is quickly imprisoned in a Kryptonite cell. Batman and Robin rescue the Wonder Twins, but - learning that the other Super Friends have been captured - go off to save them. Batman saves Aquaman from a paddle wheeler that is about to go over a waterfall, and then saves a kryptonite chained Superman from a train about to cross a destroyed bridge. Robin saves a titanium rope bound Wonder Woman from a stage coach as it's about to go over a cliff. Batman then faces the Capricorn Kid and proves he is faster when he uses a Batlaser to shoot the gun out of his hand.

Continuity in Other Media

Wonder Woman Ready for The Duel

Robot Cowboy Ready for The Duel

Wonder Woman Win The Duel
Add a photo to this gallery

Retrieved from "https://superfriends.fandom.com/wiki/Batman:_Dead_or_Alive?oldid=74082"
Community content is available under CC-BY-SA unless otherwise noted.