You may be looking for the Batgirl Disambiguation Page.

Barbara Gordon was the daughter of Commissioner Gordon. In her 'Batgirl' persona she is the ally of the Batman. She also served as a member of the United States Congress.

In the parallel universe of Earth-One, Police Commissioner James Gordon’s little girl had aspirations of being a superhero. Her hero was the young and handsome Superboy.[7]

As a teenager, Barbara’s penchant for heroism, would lead her to eavesdrop on her father one evening in his study as he spoke with the mysterious, shadowy figure, the Batman. She became infatuated with the hero and eventually turned him into an idol. And unbeknownst to her father, she soon became quite proficient in all forms of combat training.[8]

On the occasion of the Policemen’s Masquerade Ball, Barbara wanted to impress her dad by showing him that she’s not a plain-Jane little girl. She created a costume inspired by the Batman, eagerly awaiting the mid-night unveiling. As she drove to the party hotel, she came across her daddy’s millionaire friend Bruce Wayne being kidnapped by a gang of costumed men (we learn later it was for ransom money). Wearing her bat costume, she impulsively rushed in and beat the villain with the skill and confidence that made it seem as if she was born to be a crimefighter. She soon was able to help Batman and Robin capture the Killer Moth.[10]

After the excitement of the initial success, she decided to keep fighting crime as a close ally of Batman while working as the head-librarian at Gotham's Main Public Library.

It would not be long before she met the famed Supergirl. But it was not the way she intended. Mxyzptlk and Bat-Mite threw them into a dangerous alternate dimension to get them out of the way as they pulled a prank on Superman and Batman. After several days Batgirl and Supergirl managed to break the dimensional barrier just in time to save their mentors from being blasted into another dimension.[11] Both girls befriended each other during their adventure, and would team up more times.

Over the next few years, Barbara started going out on her own as Batgirl to investigate crimes.[12] During this time she met Jason Bard, a private investigator and Vietnam veteran, whom she started dating. She worked alongside him to solve cases as Batgirl.[13]

When Barbara learned of a murder at Hudson University, she tried to solve the case by herself unaware that Robin was keeping a close eye on her. Batgirl was captured by an unknown assailant[14] and eventually saved by Robin and together, they captured the killer.[15]

On one occasion, Batgirl failed in an attempt to prevent a robbery from a known felon. Angry with herself and frustrated, she confronted her father demanding that she run for Congress in his place. In her angered tirade, she reveals her secret identity to her father (who had already discovered it on his own). Her platform would be prison reform … law that creates order, not disorder. And with that, she tosses her mask into the political arena.[16]

Soon, her desire to protect society, led her to hold a political office. During the summer of 1972, the youth of Gotham elected her to Congress. After being elected, Barbara flew to Washington, D.C., to serve as a member of the U.S. House of Representatives leaving everyone and everything behind, including her relation with Jason Bard and her career as Batgirl in Gotham City.[17] Despite her newfound duties as a Congresswoman, Barbara managed to find time in her busy schedule to resume her Batgirl activities in and around Washington, D.C.[18]

While in Washington, Barbara summoned Dick Grayson to be her assistant. In reality they were secretly fighting crime and developed a flirtatious relationship, even though Barbara was several years older.[19] The two paired up to defend a foreign dignitary. Young Barbara was assigned to overlook the activities of Princess Evalina who is visiting the country on a political assignment. Together, Robin and Batgirl stop the criminal organization known as MAZE[20] from murdering the foreign Princess.[21] This would not be their first encounter with MAZE. On the next occasion, the two prevail in defeating this foe.[22]

Over the next few years, Barbara served as a successful Congresswoman. She even traveled to China on a diplomatic mission, fighting crime along the way.[23]

In the Spring of 77', Batgirl teams up with the retired 'Batwoman' (aka Kathy Kane) against the Killer Moth and the Cavalier to stop the crooks. Barbara and Kathy soon learned each other’s identities. Kathy decides to remain in retirement.[24]

After a brief team-up with Robin and Man-Bat in New York City to defeat the menace of the ‘Outsider’,[25] Barbara witnesses the virtual disintegration of Kathy Kane on her front steps. Batgirl and Robin team up to find the cure and restore Batwoman to her normal form.[26] Shortly after this, Batwoman meets Helena Wayne (the daughter of Bruce Wayne and Selina Kyle) from the parallel universe of Earth-Two. Helena had recently adopted the identity of the Huntress to fight crime, so she sought the advice of more seasoned heroines as Batgirl and Batwoman. The three girls shared some stories and advice and they eventually worked together to stop and capture Poison Ivy and Catwoman.[27]

After Barbara failed to get re-elected for Congress, she went back to Gotham City, solving regular crimes and confronting costumed criminals.[28] She eventually found a job as head of the Social Services Department at an Research and Development Company.[29]

When her father, James Gordon suffered a stroke, Batgirl largely retired from her crime-fighting activities. Barbara watched over him while he was hospitalized. Some criminals tried to murder Gordon while he was recovering. Barbara worked with Batman to stop them and Gordon recovered in time to witness her heroic actions.[30]

A couple of years later, when it was clear that a crisis of epic proportions was upon them, Barbara hesitantly donned her Batgirl suit again. Before leaving her house she called Supergirl whom she hadn’t seen in months. Barbara confessed she felt frightened and completely helpless in the face of global annihilation because she had no powers unlike her friend. Linda replied heroism isn't a matter of powers.[31] That was to be their final conversation. Shortly after, Supergirl would die fighting the Anti-Monitor. Batgirl delivered Kara's eulogy at her funeral.[32]

After the universal reset, Barbara Gordon's existence and history was completely altered, transforming her into a different person,[33] existing on a different reality.

Continuity from The New Adventures of Batman (1977)

In this series Barbara now works as Assistant District Attorney for Gotham City. Batman and Robin are also aware of her dual-identity.

Those akin to a normal, mortal, human.

Batgirl, as seen on a Super Friends Lunchbox 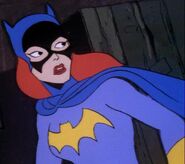 Barbara confronting her daddy about running for Congress 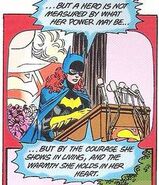