Aqualad was the teenage sidekick of Aquaman during the 20th century. He was also a member of the Teen Titans.

He rode on a giant seahorse named Imp, and he had a pet walrus named Tusky.

In the parallel universe of Earth-One on a seemingly normal day, Aquaman came upon a curious sight during one of his routine patrols. A strange little pod containing a sleeping small boy floated on the surface of the ocean, and as Aquaman opened the lid, the child awoke. It didn't take long to discern that the child was a reject from Atlantis; his unusual purple-hued eyes were the visible sign of his tragic origin – a throwback to the air-breathing ancestors of the pre-submerged continent.[2] In cases of such rare births, it was the practice of the authorities in Atlantis to send the afflicted child to the surface in hopes that a passing boat might find it. These children rarely lived longer than a few days, but this little boy (clearly at least eleven years old) was an exception to the rule.

Startled by Aquaman's sea creature friends, the boy cried for his protection, for though he could breathe oxygen through water as all Atlanteans can, he suffered from a curious malady: he was a afraid of fish! This why he was not expelled right away – they wanted to see if he’d grow out of this fear. He did not. So he was exiled.

Aquaman tries to make the young foundling happy, but giving him a "hula hoop" made of eels, in an effort to get rid of his fear of sea creatures. That doesn't really work, so Aquaman tries again, taking the boy to a water spout. After a few minutes of frolicking, the Sea King reveals the spout is courtesy of a whale! Seemingly making progress, Aquaman then introduces the boy to his octopus pal Topo and soon dubs "Aqualad" -- and so the adventure begins![3]

With Aquaman's approval, Auqalad became a founding member of the Teen Titans that Robin was forming.[4] Robin, Kid Flash and Aqualad joined forces to fight crime on a few occasions.[5]

After several years and many adventures as a part-time Titan,[6] Aqualad was growing increasingly frustrated with the lack of help regarding the truth behind his mysterious origin. Barging into a meeting of the Idylist ruling council, Aqualad demanded information on his parents. The council refused, and secretly kept all records sealed. Resolving to gain answers on his own, Aqualad discovered a banished Idylist hermit who admitted to killing King Thar. Upon seeing a picture, Aqualad immediately recognized Thar as his own father. Aqualad broke through council security and accessed the ancient files to learn his parents were King Thar and Queen Berra, who ruled peacefully until King Thar went mad and was killed by his own guards. Aqualad also believed he was left to die because his purple eyes were a sign of inferiority. Unknown to Aqualad, the ancient files were missing pieces of information which would later inform his true destiny as Tempest. Satisfied with his findings, Garth left the Idylists to search for Aquaman.[7]

Aqualad did not appear in any episode of the Superfriends.

Appearances from the Filmation series:The Adventures of Aquaman (1967): 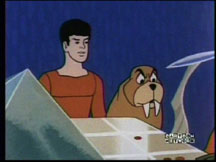 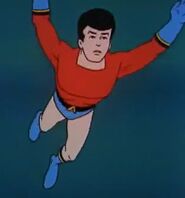 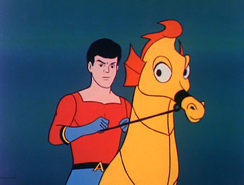 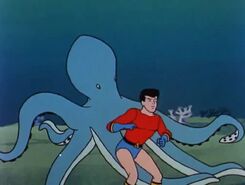 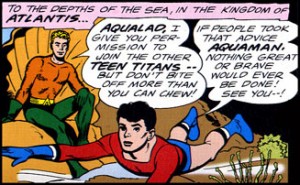 Retrieved from "https://superfriends.fandom.com/wiki/Aqualad?oldid=88076"
Community content is available under CC-BY-SA unless otherwise noted.