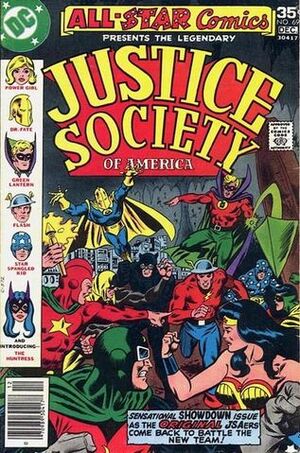 Part Four of a Four-Part Story.

Click here for and Part One, Part Two and Part Three.

In the parallel universe of Earth-Two (Earth-2A in the SuperFriends Universe), a few of Earth-Two heroes (Dr. Fate, Power Girl, Flash, Green Lantern and Hawkman) have returned from the 30th century with some of their Earth-One counterparts Superman, Batman and Green Lantern, Black Canary and Green Lantern). They had combined forces with the JLA and the Legionnaires (Saturn Girl, Lightning Lad, Shadow Lass, Ultra Boy, Chameleon Boy, Sun Boy, Wildfire, Brainiac 5, and Princess Projectra) to combat Mordru for world domination.[1]

Our five JSA heroes are greeted by Wildcat and Star-Spangled Kid. As they tell their tale and joke about taking a vacation they Commissioner Bruce Wayne in their HQ ordering their arrest with an armed police escort. A heated exchange between Power Girl and Wayne alarms one officer enough to fire on Power Girl. And because of modern technology Power Girl crumples to the ground, the team's dismay quickly turns to rage. The Justice Society easily takes down the Gotham Police force. The JSA heads out to re-group, determine their next step and attend to Power Girl. As they leave, Dr. Fate and Wayne exchange vows to finish the job.

Just as they are out-of-sight, Rodin and Hourman arrive. As they inquire about what happened, Wayne taps his old partner on his ‘uniforms symbol’ activating the JSA signal device. It contacts Starman (Astronomer Ted Knight), Doctor Mid-Nite (Dr. Charles McNider), and Wonder Woman (Major Diana Prince).

The JSA has taken Power Girl to hospital, northwest of Gotham City known for its anonymity. As they discuss their next move, a shadowy figure observes from the surrounding tree line. After a brief debate, they head to the Batcave to confront Wayne.

Upon arrival, they are surprised to see their former comrades allied with Wayne. Wonder Woman attempts to lasso the team, but the Green Lantern blocks her lariat of truth. Then, inexplicably, without any real explanation they begin to fight. Starman and the Star-Spangled kid square off against one another. Despite the technological edge the Star-Spangeled Kid's cosmic converter belt gives him over Starman's cosmic rod, experience wins the day. Doctor Mid-Nite detonates a blackout bomb, momentarily plunging the Batcave into darkness. The Flash disperses the darkness by spinning his arms very fast. Doctor Mid-Nite, astonishingly, is able to outmaneuver the Flash, tricking the speedster into crashing into the Batmobile. Robin's acrobatic acumen and combat prowess prove more than a match for the Hawkman. While Doctor Fate pits his sorcerers might against Hourman's Miraclo enhanced strength. And lastly, remaining true to form, Wildcat attacks the heart of the matter, tearing into Wayne.

As the battle continues, a shadowy figure watches Power Girl from the hospital window. The mysterious figure is watching as Clark Kent shows up to visit his Kyptonian cousin.

Meanwhile, back at Wayne Manor, the insanity continues. It comes to an end abruptly, when Superman commands them to stand down. In his arms is the recovering Power Girl. She reveals that Wayne is under the influence of the Psycho-Pirate. Doctor Fate breaks the Psycho Pirate's hold over Wayne's mind. Wayne collapses, and begs forgiveness for his actions. He laments that a year ago his actions cost the life of his wife, Selina Kyle and is here tonight almost cost the life of someone else. Power Girl hugs him as he states that he is thankful to have such beautiful souls in his life.

It is revealed that the mysterious figure watching from the shadows is the Huntress, who is preparing to make her debut.

Retrieved from "https://superfriends.fandom.com/wiki/All-Star_Comics,_69?oldid=68537"
Community content is available under CC-BY-SA unless otherwise noted.