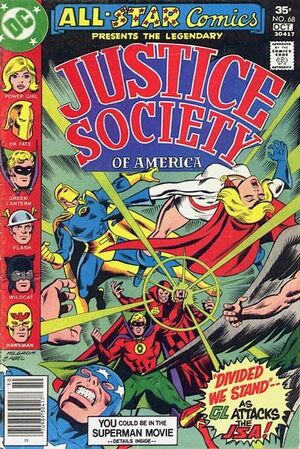 Part One of a Four-Part Story.

In the parallel universe of Earth-Two (Earth-2A in the SuperFriends Universe), at the Gotham International Airport, just as the first commercial Concorde SST flight is coming in for a landing Green Lantern is wreaking havoc and lamenting about his life. Meanwhile, at the D.F. Malan Airport, some 12 miles east of Cape Town South Africa, Ambassador Dick Grayson and Hourman (who had gone to South Africa to seek discreet medical care after a severe injury)[1] are boarding a plane. But, before they do, they must pay the ransom. At that exact moment, a half a world away, Doctor Fate, Power Girl the Flash, Star-Spangled Kid and Hawkman confront GL. They are confused at first, but when he has an emotional break-down, Doctor Fate realizes that there is an unseen mystic force at work.

Just then the Psycho-Pirate appears, and acknowledges Doctor Fate’s perception and his role. His role is given to him by his ability – which is to control other men’s emotions: spark their hopes, plunge them into despair, hatred or even lift them into love! And with that, he vanishes, but not before he plunges the JSAers in soul-crushing despair. Green Lantern has also disappeared.

Hours later, a diplomatic flight from South Africa lands at the Gotham International airport. The flight is greeted by Commissioner Bruce Wayne who wishes to discuss his concerns with the Hourman. After the devastation at the airport, Bruce is convinced that the JSA needs to be held responsible for this destruction and their actions in general. That is why he sent for Dick and why he needs Hourman’s help.

Back the secret HQ of the Psycho-Pirate, he gloats over his control over the Green Lantern and his victory in sowing dissenting in the faith and good-will of the JSA. At the same time, the JSA is also discussing the events of the day. They get into an argument and the Flash vacates the building. Power Girl follow, but is unable to keep track of him. This is startling to her, but Doctor Fate reveals the reason. The Flash and the emerald crusader have crossed the vibratory barrier separating them from their twin world – Earth-One.

Back at the Psycho-Pirate’s lair, the scarlet speedster arrives and is greeted by the Green Lantern and the Psycho-Pirate. As they celebrate their evil plans, the JSA arrives, with Doctor Fate leading the charge saying, “You were a fool to think to hide on Earth-One, old enemy!”

After a brief battle, Hawkman, Power Girl, Star-Spangled Kid and Doctor Fate are eventually defeated. Only Wildcat remains. He singles out the Power-Pirate first, knocking him out with one blow. This frees the Flash and GL from his mystic magic.

A few hours later, 22,300 miles over Earth-One at the JL Satellite HQ the JSA debriefs the Green Lantern of Earth-One.

Meanwhile, Commissioner Wayne is bringing his plan into the light.

Retrieved from "https://superfriends.fandom.com/wiki/All-Star_Comics,_68?oldid=70932"
Community content is available under CC-BY-SA unless otherwise noted.