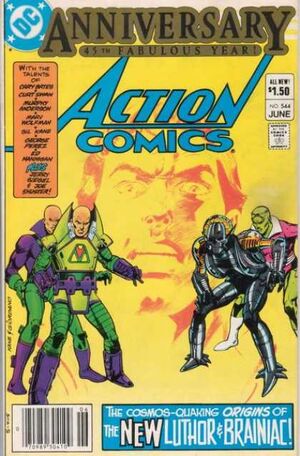 Lex Luthor rises from the rubble following his most recent confrontation with Superman. He hobbles to one of his safe houses and meets his robotic servant RX99. RX99 helps Luthor to a rocket ship where upon he blasts off from the planet Earth, seemingly forever. Thoughts of hatred for the Man of Steel continue to fill his mind however. He flies to the planet Lexor where his wife Ardora comes out to greet him. Ardora tells Luthor that during the time that he has been gone, she has given birth to his son Lex Luthor, Jr. Luthor is elated and feels that he now has a chance to start over with a new life. Addressing the citizens of Lexor, he announces his plans to stay on the planet permanently to raise his son. The townspeople still regard Luthor as their personal savior. Lex tells Ardora of his lifelong battle against Superman, and vows that he is no longer interested in pursuing a life of crime. He throws himself into the role of Lexor's champion and uses his super-science to create a Neutrarod – a giant mechanical antenna that will help stabilize Lexor's planetary core. Now the citizens of Lexor need no longer fear the geological upheaval that has plagued their world as of late. Back on Earth, the robot RX99 develops partial sentience. Feeling a need to fulfill his master’s desires of revenge, the robot activates one of Luthor’s many doomsday devices. A satellite from space produces a force field that completely envelops the city of Metropolis. Superman investigates the matter and finds the satellite with the stylized "L" engraved on the side. After destroying the satellite, Superman flies off to track down Luthor and bring him to justice. He has no idea that Luthor is actually innocent of this most recent attack against the Kryptonian’s adopted city. Meanwhile, Luthor is still obsessed with Superman. Putting his new reputation at great risk, he develops an elaborate war-suit and secretly tests the suit's weapons systems on a nearby transport flyer. News of this mysterious "Marauder" begins to circulate, and Lex publicly vows that he will find and stop whoever is using this destructive armor. Superman eventually arrives on Lexor as Luthor suspected, and he can no longer remain in hiding. Donning the war-suit, he flies off to face the Man of Steel for what he believes will be their final battle. The fight is evenly matched as Lexor's red sun slowly saps away at Superman’s strength. Superman's body is coated with a special sunscreen to protect him, but eventually this begins to wear off. During the battle, Lex fires a blast of energy at Superman from his gauntlets. The blast ricochets off Superman's chest, striking the Neutrarod. This causes a severe power surge that channels deep into the planet's core, starting a chain reaction. Within minutes, Lexor's core explodes, killing millions of Lexorians. The blast hurls Superman backwards, and he believes that Luthor has died in the explosion. Turning, Superman flies back towards Earth, confident that he has seen the last of his archenemy. Lex survives however, and clings to floating chunk of rock. His hatred for Superman has reached new heights, and he swears that he will soon have his revenge.[1]

As Superman patrols Metropolis, he begins to experience feelings of alienation. Although he calls himself human, he still feels like an alien outsider. He flies off into outer space to investigate a potential problem with the computerized planet where he last fought Brainiac. The planet's sun Epsilon 4 goes supernova, and Superman is caught in the solar winds. What Superman doesn't realize is that the comatose form of Brainiac trapped inside the core of the prison planet has stimulated the star's unstable core forcing Epsilon 4 to nova. The energy released from the explosion causes a reaction in the prison world's electrical systems, and Brainiac begins to lose physical cohesion. His consciousness becomes a data stream that travels across the galaxy absorbing massive amounts of information. The electron trail returns to the prison world where it interfaces with the planet's computer systems. A new body is formed to house Brainiac's conscious. The villain is reborn and constructs for himself a ship in the shape of a giant skull. Interfacing directly with the ship, Brainiac flies to the planet Systus 2 and begins turning it's population into his personal slave force. The leader of Systus 2, Skora, manages to escape and flies to Earth where he warns Superman of Brainiac's actions. Superman flies to Systus 2 only to find its once majestic cities have been leveled. Brainiac fires missiles at Superman that robs him of his powers.[2]

Retrieved from "https://superfriends.fandom.com/wiki/Action_Comics_Vol_1_544?oldid=89852"
Community content is available under CC-BY-SA unless otherwise noted.