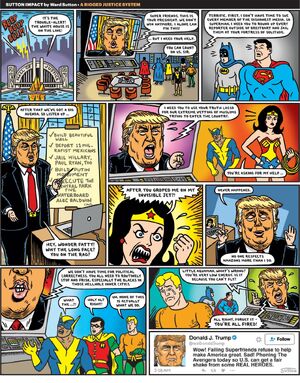 He goes on to tell everyone that he doesn't have time for political correctness, telling her that sometimes frisking is necessary. He goes on to mention that it's especially necessary in black communities. This offends Black Vulcan and Robin even says "Holy alt right!" Aquaman then tries to politely explain to Trump that the Superfriends don't operate like that. This in turn causes Trump to make fun of Aquaman since he's an aquatic superhero that can't fly. Trump then tells the other Superfriends that they're all fired.

Retrieved from "https://superfriends.fandom.com/wiki/A_Rigged_Justice_System?oldid=86155"
Community content is available under CC-BY-SA unless otherwise noted.