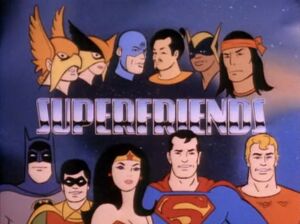 Chronology
Previous Series:
1980 Shorts
Next Series:
The Best of the Super Friends re-runs only (1982)

This incarnation of the Super Friends ran in 1981 on the ABC Network.

We find ourselves with seven-minute shorts once again. Viewers would be treated to 3 new episodes weekly and a rerun from one of the previous six years.

These new adventures featured appearances by the core group of the five classic Super Friends (Superman, Batman and Robin, Wonder Woman and Aquaman) along with the illustrious Wonder Twins (Zan, Jayna and their pet monkey Gleek). There were also guest appearances from members previously depicted in Challenge of the SuperFriends series. Occasionally, a DC Villain, namely a couple of former members of the Legion of Doom would resurface to menace our heroes, but for the most part, our heroes would continue to deal with non comic villains and threats.

The 1981 season was unfortunately shorter than 1980 season due to an animator’s writers strike. It was reduced down to a 30 minute show, only consisting of these new shorts, and eventually melting in with the reruns of the past. There was no special title and the quality of these shorts were the same as the previous ones. There was one new addition to the SuperFriends.

Eventually, the strike cleared up and suddenly, the SuperFriends now faced some real animated Super Hero competition on Saturday mornings. Reruns of Thundarr the Barbarian were on the ABC lineup that year as well. NBC had three Super Hero hits. Hanna-Barbera featured Space Stars (these shows used a lot of stock music heard on the SuperFriends). Filmation’s presented the Kid Super Power Hour with Shazam. Also some real competition for the SuperFriends came along with a 3 season show by Marvel/Sunbow Productions[1] called Spiderman and His Amazing Friends. Over at CBS, Filmation presented the Tarzan/Lone Ranger/Zorro Adventure Hour and the fantasy themed cartoon series, Blackstar.

For a DVD set of SuperFriends Shorts (Parts 1-3) check out I Miss My TV Show, an incredible website for old and rare cartoons.