Apache Chief was a Native American superhero and a member of the SuperFriends. He had the ability to grow to 50 feet or larger by saying "ineck chock", which was explained as the Apache word for "big man."

While still a young brave, he went for a walk with the chief of his tribe. The two men are unexpectedly attacked by a bear, but the chief recognizing that the young brave man might be ready for a test such as this, gives the younger man a pouch of a special "magic powder", which will amplify the user's thoughts and abilities a hundredfold. The young man resolves to be strong and brave (heeding the chief's advice that whatever is in his mind at the time, the powder will amplify), and upon sprinkling himself with the powder and invoking the phrase "ineck chock", grows a hundred times larger, stronger and braver. He disposes of the bear, without violence, proving that he has passed the test. Unfortunately, a passerby witnesses the entire affair and steals the dust, using it on herself and becomes the evil Giganta (though without needing to recite anything the way Apache Chief does).[1]

On a later incident, a space giant nearly as big as the solar system is using planets as marbles. The earth gets caught under his beard and he places the earth in a bottle around his waist. Apache Chief repeats his phrase to grow bigger and bigger until he's bigger than the earth. He climbs out of the bottle and grows even more until he's the size of Colossuss. They wrestle in space until Apache Chief pulls out a shrink ray and shrinks him down to human size.

With these two examples, it can be assumed that Apache Chief could possibly grow to many times the size of the solar system, or even universal size.

Without relying upon his super abilities, Apache Chief possesses the strength level of a man his age, size and build who engages in intensive regular exercise. When using his size-enhancing powers, Apache Chief's strength level increases in proportion to his relative size. 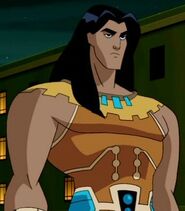 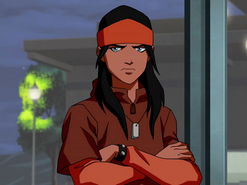 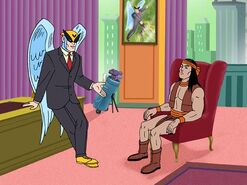 Maurice Lamarche
Harvey Birdman, Attorney at Law
(2001-07)
Add a photo to this gallery

Retrieved from "https://superfriends.fandom.com/wiki/Apache_Chief?oldid=93480"
Community content is available under CC-BY-SA unless otherwise noted.